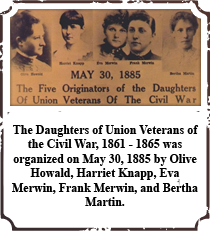 Incorporated as "The National Alliance of the Daughters of Veterans of the United States of America" on December 12, 1885, in Massillon, Ohio. Signers of the Original Articles of Incorporation: Minnie F. King, Bertha M. Martin, Olive F. Howald, Eva Merwin, and Amy Merrill.

They were endorsed by The Grand Army of the Republic at the 34th Annual Encampment held in Chicago, Illinois, 1900.

Name changed to Daughters of Union Veterans of the Civil War at the 35th National Convention held in Grand Rapids, Michigan, 1925.